Thayer Academy's Leonie Kuehberger '21 will compete for a spot on the German Women's National U18 Ice Hockey Team.

This month the junior goalie — who is also a German national — will travel to the "BundesLeistungsZentrem Fuessen" (loosely translated as the "German Hockey Performance Complex) to practice with the team and hopefully earn a place on the German roster.

In addition, the Hingham resident trains privately with Brian Eklund, a former NHL goalie and a goaltenders coach at Boston University.

Roughly six months ago Kuehberger and her family reached out to the German Ice Hockey Federation to get general information about the team's structure and whether, in theory, the young netminder would be eligible to play. That led to contact with the U18 national team coach and a January request for training and game footage. However, it was footage provided in February of Thayer's 2-0 shutout of St. Mark's that finally secured the national training camp invite for Kuehberger. 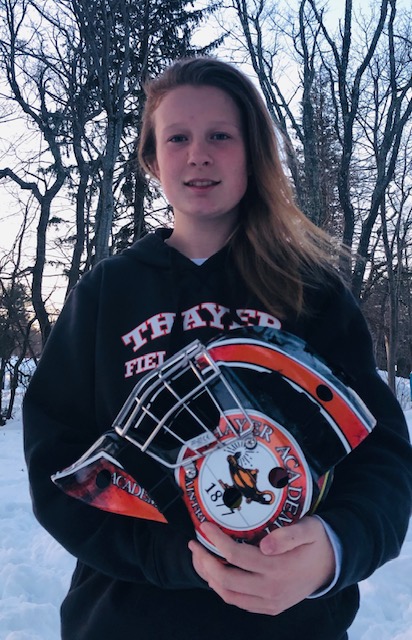 Leonie Kuehberger '21 has played two seasons as a varsity goaltender for the Academy. She will compete this month for a spot on the German Women's National U18 Ice Hockey Team.