Thayer Academy alumnus Isaac "Ike" Butler '16, an undergraduate at Washington University in St. Louis, was one of three winners of the A.E. Hotchner Playwriting Competition held at the university.
Butler's play, "Arriving At," tells the story of six passengers who get stuck on the last outbound Red Line train from Boston. Under the direction of Annamaria Pileggi, university drama students performed a staged reading followed by a Q&A session.
"It felt great to have so many people take time out of their day to see and dote on something I created," said Butler, adding that he especially appreciated the feedback from the audience.
Butler was the sole undergraduate to earn the honor. The playwriting competition and festival is an annual event at the university.
A Dorchester native, Butler grew up taking the Red Line, so the topic was familiar to him. He is currently a film student "trying to write and create as much as I can." Down the line, he wants to pursue writing for television and movies.
Butler remembers taking Kate Hayman's AP Language and Composition as a junior and says it helped him grow as a writer.
"It certainly interested me enough to keep writing," he said.
For more info, click here. 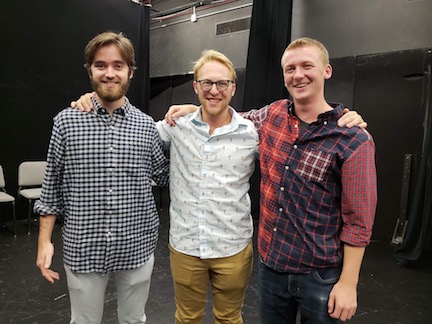 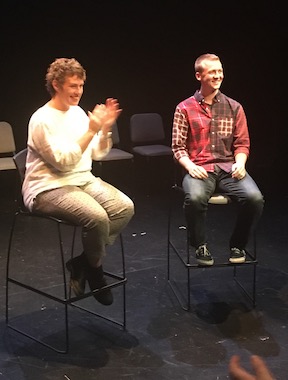 Isaac "Ike" Butler '16 with dramaturg Michele Volansky, who was brought in to help the students with the final production, during a Q&A session.