The Thayer Academy Middle School Chess Club made history Nov. 15 with its first-ever competition: a double-elimination "friendly" against host Derby Academy in Hingham.

"The students were excited by the outside competition," said MS Math Faculty Emmett Knox '04, who traveled with six Academy students and fellow coach Greg Spitz '06. "They were able to put into practice strategies we've been studying over the course of the term, and they were able to take away key points to strengthen their individual games."

One very dramatic match involved Ryan Dowden '26, who battled his opponent to a draw before defeating him in an overtime speed match using a last-second tactical maneuver. Another highlight was the play of Justin Le '26, who won three consecutive matches without a break to advance to the final (which will be played at a later date). Not to be outdone, Luke Shahied '26 fell behind in one match only to carefully navigate a draw and then win the overtime speed round.

Knox called the event "a major success," adding that both he and Derby Academy coach Mark Rabuck learned a lot about how to conduct such competitions while keeping them fun.

"We Thayer coaches were extremely proud of the level of respect and sportsmanship our students displayed," said Knox. "They've laid a foundation for a Thayer tradition of enthusiastic investigation into the strategy and infinite wonder of one of the world's oldest and most widespread games."

The chess club held its second set of matches Nov. 22 against East Middle School in Braintree and plans more such events in the future.

Last spring "chess fever" broke out in the Middle School, culminating in an in-house tournament which saw more than three dozen contestants. This club evolved from that initial enthusiasm.

The Thayer Academy Middle School Chess Club recently held its first-ever competition by traveling to Derby Academy for a double-elimination "friendly." Representing Thayer in this photo are, to the right, brothers James Shahied '27 and Luke Shahied '26. 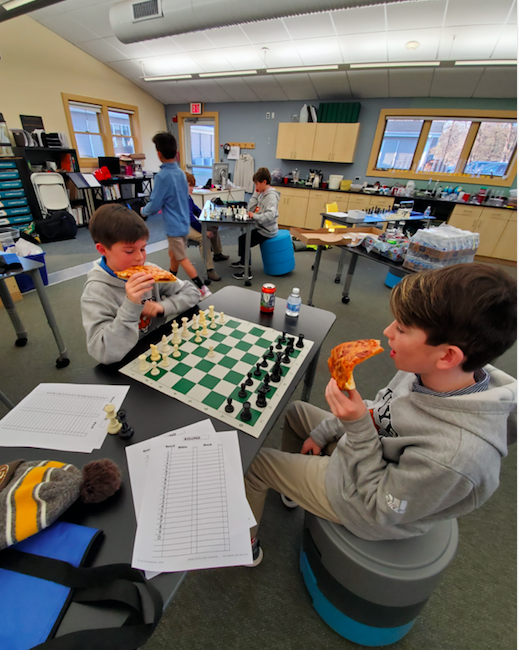 James Shahied '27, at right, carefully notes his moves during a chess match.